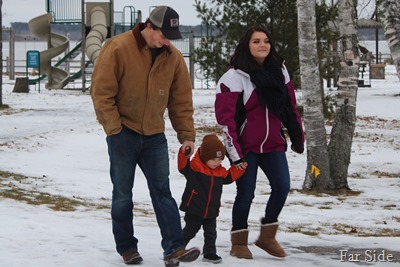 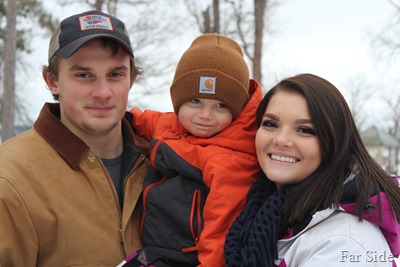 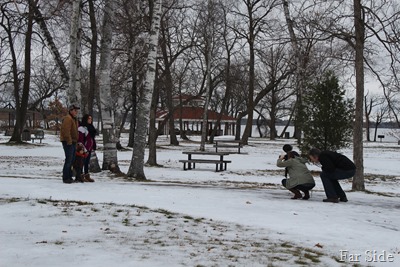 Glad you had a nice day (except for cold, windy weather!) Mikey is really a cutie. Our Mikey is now 58. Time flies.

Goodness, Mikey looks so grown up! They change so fast.

Sounds like a good day. We stayed home and enjoyed some quiet until we lunched with our neighbors!
I'd love to take a trip to Hobby Lobby! I may go yet this month!

Hey Mikey is growing so fast!! He is a cutie pie. I love these pictures. Maddie sure is a pretty girl. I just left comments on your last four posts. Don't know why I can't keep up any more.

Look at that shy smile! How wonderful that they came from Michigan to see everyone.

Oh wow! Look at that little Hey Mikey! Boots and walking and CUTE! Enjoy. And thanks for letting us know about the tree in PR. I had to immediately look at the PR web cam to watch the tree and traffic for a moment. I watched last night so got to see the tree lights on. Happy Holidays! goodnightgram

What a cutie! He is really shooting up!

Hey Mikey is a cutie. He is sure growing. Our youngest used to do the same thing with the chips in restaurants. He would lick the salt off and then him to his dad. He thought it was hilarious. :-)
Blessings,
Betsy

A table full of loved ones... what could be better?
Hey Mikey sure is cute.

What a beautiful little family!!!!!!!!! I love the pictures!!! Families like these convince me that just maybe God does want the world to continue. <3 <3 Lovingly, Andrea xoxo

OMG! How big Mikey is!! It startled me.
What a wonderful visit. Love all the photos. :)

Lots of fun with family. It gets dark very early.

Oh my goodness, I've missed them! It is so good to see them again and Mikey has really grown! I know it warmed your heart to see them. When we have been away from our loved ones it is like a drink of cool water to see them again. They are a beautiful family!

Oh my gosh has he ever grown! What a cutie he is and how happy everyone must have been to see them! Home for the holidays....too bad they can't stay right through Christmas! What a sweet family and so glad you got to see Mikey!

I guess he will always be Hey Mikey now, eh? Such wonderful pictures! Where does the time go?? :-)

Hobby Lobby...now, there's a place you could go bankrupt at. I'm surprised at your restraint ;)

Glad you had a sweet visit with family.

what a great visit and that little one is really growing :)

Glad you got to see the family, especially Mikey. If the other hat is too big, hold on to it for when he grows in to it. With how fast they grow, it likely won't take all that long. It will come in handy some other Winter.

Lovely family you have! Sounds like it was a perfectly heart warming day.

A table full of family, that is great. I really like Mikey expressions even if he isn’t smiling.