Dewdrops formed like huge tears on the Lupine last spring. 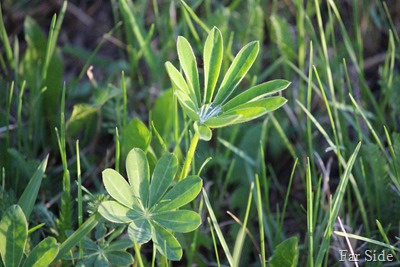 I planted seeds from my former brother in law years ago. 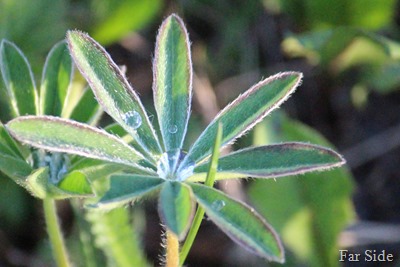 Some years the Lupines are sparse but enough seeds have been spread in the soil over the years that we always have a few blooms. 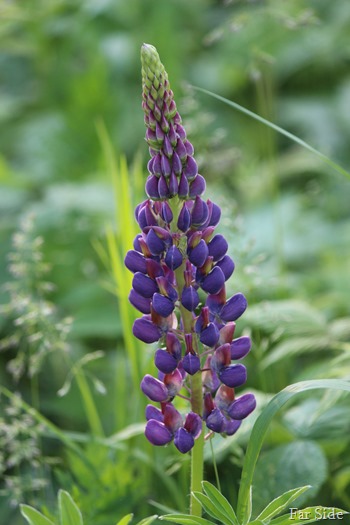 I thanked him over and over again for the seeds…and when they bloom I think of him.

Our former brother in law lost his battle with multiple myeloma but gained his heavenly home late in the day on November 1st.  Private services were held with his immediate family; his children and their spouses, grandsons, his brothers and his mother.  His ashes will be spread next summer. He didn’t want a funeral.

Although he ceased being our brother in law about 20 years ago, we always considered him to be a relative.  As a single father he was instrumental in raising the children that he and my sister shared.  He was very proud of his children and grandsons.

I will miss his traveling adventures to far off lands…he always took photos of exotic flowers for me because he knew I enjoyed them. The last year since his diagnosis he ceased traveling except to Rochester and the Mayo Clinic.  His multiple myeloma was in remission but his doctors felt that he should have a stem cell transplant to be in permanent remission.  As with many procedures there are risks…the transplant opened the door for a very rare agressive form of cancer to overtake him…there were only 28 cases of this kind of cancer in all of the United States….and he was one.

2 Timothy 4:7 “I have fought the good fight, I have finished the race, I have kept the faith.”

Thanks for sharing. I was very moved/choked by your words. I am happy you former BIL is no longer suffering!

You will have fond memories to contemplate each spring when the lupine bloom.

What fond memories you have of him and what little kindnesses he doled out. I do believe that those small acts of kindness are what are most cherished by those left behind. So glad he is no longer suffering. My condolences to you and his family.

Some people are just naturally generous and thoughtful. He sounds like he was one of them. Thank you for sharing him with me, and I hope that all his family and friends are comforted by your wonderful words.

My condolences for your loss. He sounds like he was a good guy and will be missed.

I’m so sorry about your brother in laws passing. He sounds like a very kind man.you have had so many losses recently and my heart aches for you. My prayers are with you all.
Blessings,
Betsy

He sounds like he was a wonderful man. Always hard to lose family, but when it is to something so rare it is harder still. Too many losses lately. I pray for a peaceful, quiet winter for you two. :)

I am sorry for your loss. It's good to maintain relationships with so called exes.

It's lovely that you were able to maintain a relationship with him. That doesn't always happen with "in laws." The lupines remind me my mom, who died about this time in 2009. Once when we were on a trip somewhere in central/northern California, my mom noticed tall blue flowers blooming on the hillsides. "Look," she said, "blue lupines." They were some of the wildflowers she saw growing up in Colorado.

Condolences on the loss of your former BIL. Nice that your Lupines will help keep his memory alive.

So sorry for your loss! It is never easy and you are never ready, even when you have gone through their illness with them for some time and you know that the end will come! Sharon

You've seen much recently. I hope when the Lupines bloom next year you are filled with sweet rememberings. (Hugs))

I'm so sorry for your loss. Sometimes amazing things happen in our families like the wonderful relationship you had with your BIL.

He sounds like a guy with a strong great character. Raising kids alone is not easy and now getting to the age that he is he loses all the rest of the good things in life. I am so sorry.

I am so sorry for your loss. The lupines will be a lovely reminder of him. ((hugs))

Hope you can find comfort in the good memories and the lupines next time they bloom.

What a difficult turn of events on your brother in law's health treatment! My thoughts and prayers will definitely be with you and all the family. Glad you will have the Lupines to always remind you of him!

What a sad turn of events for your former BIL. Just when he thought he was "in the clear". We know not the day nor the hour, do we. I'm glad you have the Lupines to remember him by. Deepest sympathy, Andrea xoxo

So sorry for your loss. I too keep my ex- brothers in law as part of the family.
May his soul rest in eternal peace.

OH! My! Heavens! What a hard sad fall you are having. My heart goes out to you!!! Hugs!

I am sorry for your loss. This has been such a difficult year for you. I'm glad you have the lupines to bring you all the good memories of him. Sending peaceful and healing thoughts to you.