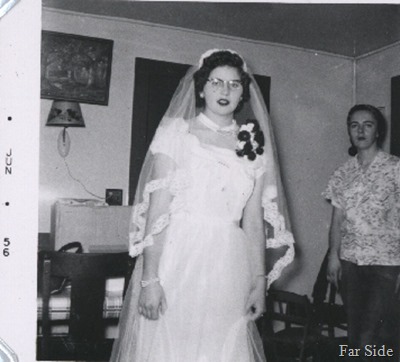 Here she is, that is my Aunt Marion in the background. 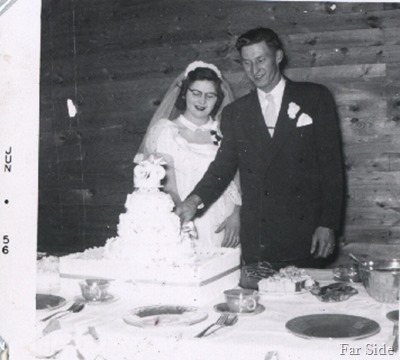 June of 1956 Aunt Toots would have been 17 and Ray 22 years old. He was five years older than she was.  They were parents to four children, two girls and two boys. The last time I saw my cousins was at their fathers funeral. The girls were older than the boys, one is retired from the Army and lives in Kentucky, the other changed her name and may or may not live in the cities.  One of the boys lives nearby and the other way up north.

My Aunt and Uncle had a tumultuous relationship, it had it’s ups and downs.  They both died young. 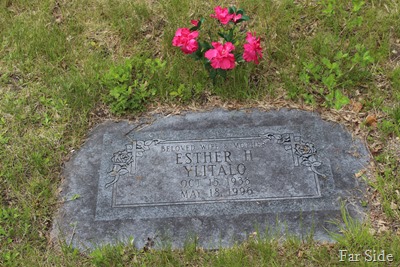 Her real name was Esther but hardly anyone called her that.  She was 57 years old and died of complications after surgery and liver cancer. 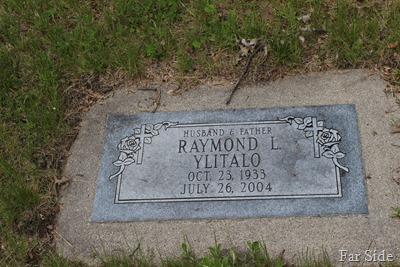 Uncle Ray lived a bit longer, he was 70 years old when he died.  I believe his liver gave out.

I learned to never visit in the late afternoon or evening.  Mornings shortly before noon was the best time to visit.

My Aunt was a wonderful cook and baker.  When she opened a cafe I asked her why? and she said “OH I needed a few throw rugs.”  The cafe had a bar…and an empty stool to fill after the cafe closed.  My Uncle ran the bar after he closed  his repair business for the day…their whole world revolved around a beer bottle.   It was sad to see.

I was an obsertvant child/young adult/adult.  What I saw, I didn’t like.  I especially felt sorry for the children.  Many times my Aunt would have a black eye, although I heard she packed a heck of a punch herself.  I am not quite sure why she stayed with her husband?  She was pretty and she was a talented baker and cook…perhaps it was for the children. But then I remember one time when they had beer in the fridge but no milk.  Sometimes it is a miracle that small children survive their upbringing. ( Now a days Social Services would have been called.)

I was not able to attend her funeral….I believe we closed on our home in North Dakota that day and were moving in.

I knew where she was buried and the grave was easy to find as the cemetery is not real large, a simple cemetery on the edge of town, right behind the site of the little cafe and bar…of course the cafe and bar are long gone…I believe a Firehall has taken it’s place.

When I returned to pick up my flowers, I was happy to see that there were more flowers there.

My Aunt had a rough life.  How much she brought on herself…I am not sure.  She was certainly my Mother’s only real spunky sister…perhaps that is why I liked her so much.