Far Guy and I were wandering around in a cemetery, filling some grave photo requests on our way back from Fargo ND.

Far Guy said “Why are all those stones the same?” 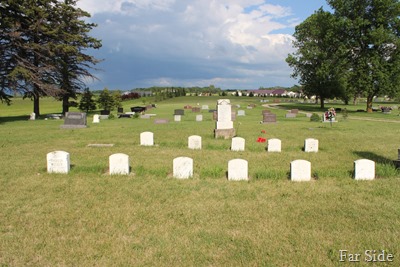 They were all graves of children in the early 1900’s.   The large stone in the background told the story “ Orphan’s Home. ”

I did a little research…curiosity got the best of me….imagine that.

In 1895 The Norwegian Lutheran Chirch of America started an Orphanage in Lake Park Minnesota.  Later it would become a Lutheran Social Services Orphanage.

From the 1900 Census I learned that 31 orphans lived in the home, there was also a Superintendent, Teacher, a laborer and four servants.  The children that were in the orphanage were mainly children of Norwegian families but a few parents were born in Minnesota and France.  The children ranged in age from 3 to 14 and were born in Minnesota, South Dakota, North Dakota and Norway. 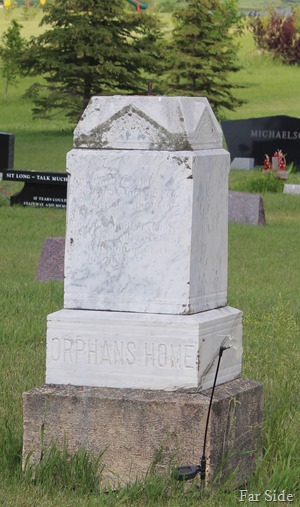 I never knew about an orphanage in this area of Minnesota….I thought they were all down in “The Cities.”

Yes there are some words on this memorial…but they are in Norwegian.

I read some accounts…one mentioned a young Father not having the slightest idea what to do with his children after his wife died…so he dropped them off at the orphanage.

There was another Orphanage called Wild Rice Orphanage ( near Twin Valley) a little further north….that burned down and many children were sent to Lake Park.