We still struggle with Doctors and Far Guys Trigeminal Neuralgia. We are comfortable with Dr. P he seems adequate. There are no miracle cures..Trigeminal Neuralgia is a rare disorder that you must just learn to live with...easy for me to say..Far Guy is the one with continual pain. Dr. P is still taking good care of Far Guy…nothing is new with TN, it is still one of the most painful disorders known to mankind. Dr. P is still taking good care of Far Guy..no great discoveries are forthcoming to fight this rare disorder. With Dr. P’s blessing Far Guy had several steroid injections in his Trigeminal Nerve.  The results are mixed..some were not so good and made the pain worse..others took the pain away completely for six weeks. Far Guy says I like his Doctor more than he does and perhaps I should just go to the appointments by myself.


No new Grand-babies..No divorces..a few deaths (two cousins and a very dear friend) This year five friends died.. Rhonda, Jim, Sam, Charles and Pat. Two family members, my Uncle Delbert, and my cousins fiancée. No Grandbabies ( I think the baby years are over).  Deaths we had a few..My Aunt Marie and Far Guys Aunt Esther. No new grandbabies and no divorces. Deaths we had a few.. Aunt Violet, friends Ardith and Elsie both from Indiana and friend Tammy succumbed to breast cancer. No Grandbabies..I guess I should really give up on this since our baby turned eleven:) Deaths..My Cousin Rosemarie and Far Guy’s Uncle Willard. No new grandbabies…no divorces… two deaths; my Aunt Senia ( old age) and a dear friend Joan from ALS.


No new pets, and no pet deaths. In 2009 Madison got a new kitten that she named Ziggy. Trica found a new home for her Pomeranian Daphne or "Daffy". Daffy now gets to be the Queen of her castle and no longer has to tremble in fear and hide under the couch to escape her terrorist companion Dakota who had a stroke a number of years ago and has an ongoing thyroid problem and is just not right in the head. I miss Daffy..she loved me. When they all lived with us..she was my constant companion. Paige got a kitty that she named Skittles and Savannah got a  pitch black kitty that she named Luna.  Andy went out and got himself a Sheltie puppy who is named Little Elvis. No new pets and no pet deaths.  No New pets or pet deaths..although Dakota is not looking real good.  Dakota died in May she was ready to go the The Rainbow Bridge…she lost most her hair and was very confused.  Jade is a new Black Lab puppy that belongs to Savannah and her beau. Chaucer is not looking real good some days, he has tumors (he belongs to Jen, Andy, Noah and Adam…although who really owns a cat?)

Biggest Adjustment..Far Guy's Trigeminal Neuralgia and how it affects our day to day life.Ditto..we must always be flexible.... it just may not be a good day, or a good week.Ditto. Ditto. Ditto. Ditto.


Biggest Frustration.. Doctors that don't know their butt from a hole in the ground, and the phone ringing. Ditto.. and gaining weight because I quit a nasty habit..that I enjoyed..but now my metabolism is all out of whack.  For now and since July I have been an ex-smoker.  It ain't easy..it has been one of the hardest things I have ever done in my entire life.  I have however curbed the desire to lick every ash tray I see..and those smokers outside freezing their skinny butts off..I envy them..perhaps I will get over that with time..old habits die hard..I began to smoke as a teenager..that was well over forty years ago.  My daughter said "Mom we would rather have you alive and healthy looking and a little fat, than dead and skinny." The phone ringing still irritates me..and now that Far Guy has a cell phone sometimes they both ring at the same time. We are still non smokers..fatter ones.. Ditto..Still non smokers..still fat too. Ditto..still non smokers..still fat too. I still hate the phone ringing and most Doctors irritate the heck out of me. Ditto…still fat non smokers.  Stupid people who don’t know their butt from a hole in the ground, this would include our mailman and most delivery drivers.


Happiest Moment..a very nostalgic Ferris Wheel Ride last August with Far Guy. Playing a little "kissy face" stopped at the top! I had to think on this for quite some time.. I had many happiest moments this year and if I had to pin it down to just one moment it would be watching Chance and Far Guy on the lake shore of Lake Superior..watching Chance run between us. The happiest moment this year: When our oldest daughter Trica woke up after being unconscious for more than 24 hours..and she knew who we were. The happiest moment this year was finding out that Far Guy made the Emergency Life Flight to Fargo alive and that he had no Heart blockages..he had treatable pericarditis.  The happiest moments this year were spent with the Grands..at Guitar Concerts, Hockey Games and out on the lake. 2013 happiest moments…our evening rides watching for rainbows and sunsets and watching the Perseid Meteor Showers with Jennifer at the local cemetery before dawn.

2013 Notes: Chance is still very spoiled.  Far Guy is still forgetful ( a side effect from his medication).  I am more forgetful too and I don’t take medications.  I have no excuse…just getting older.  I struggle with exhaustion from time to time most likely old age.
Happy New Year’s Eve..stay safe..use a designated driver or call for a ride..or  don’t drink alcohol..have a soda instead! :) 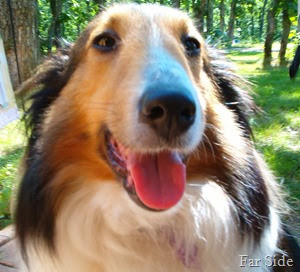 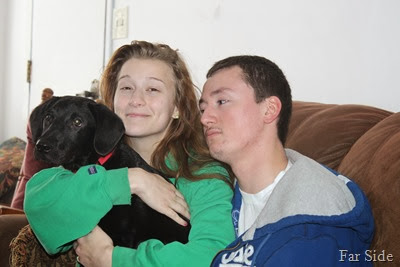 Thank you for sharing your year with us - it was just the way your recorded it. Looking forward to next year and more instalments of life in the home of Far Side, Far Guy and Chance.
Take care
Cathy

So nice to see the trajectories of those years, and how many things change, and how many stay the same. Glad you are Far Guy are still not smoking! It took several years for me to be able to finally lose the extra weight after I quit. But it did eventually settle down. :-)

Thank you for the "year in review". As with most of us there have been some changes as well as no change at all. Hope 2014 is a very good year for you and Far Guy.

I finally found my Reader's Digest that I had been looking for, as it had a great article in it about TN. I don't know if it could help your husband or not. The Dr.'s Name is Michael Lim, MD assistant professor of neurosurgery and oncology at Johns Hopkins School of Medicine.
The Reader's Digest is from April 2013.
I hope I'm not intruding on your business. I just thought you might like to see this.

Thanks for sharing......I do love reading your blog every day! I'm just about your age, and I don't know why "they" call this time the golden years! Among all the blessings are real struggles and heartache. But as my mom says (she's 90) it's better than the alternative! Happy New Year and more blessings to you.

Yes we have read that article, my husband has the rare form of TN called Atypical Trigeminal Neuralgia. We have seen numerous Neurologists and Neurosurgeons. They do not recommend any form of Surgery because they could make the pain worse. Thanks for mentioning that article, many people are magically cured with surgical intervention...others are not. :(

I really enjoyed this post! I agree with everything you had to say about doctors. Most of them have a God complex!
Happy New Year to you and Far Guy!!

As in the past, I really enjoy your years in comparison. I saw on Pinterest that someone takes 3 X 5 cards in a file box. She has one for each day of the year. Each year she makes a comment of the day's activities with the year beside it. Time-consuming but very interesting like your year in review. My favorite of what you have written that Far Guy says you should go to his doctor because you like him better than he does! Also - - sorry your house doesn't seem to stay as warm. Gas heat is usually better than that.

That was a wonderful post! I would of never thought of doing that. It is amazing to realize how some things don't change much from year to year and others change quite a bit!

Happy 2014 to you and yours. My wish for you is a year full of lots of JOY, PEACE, LOVE and BLESSINGS.

I found your years in review fascinating and like how you color coded the years so I could see the changes and progress and how things are working out, especially health conditions. Happy new year full of blessings.

I too like the method you have taken to update us on all the important events in your life.
Sorry you have lousy doctors. Not quite the same, but we spent 6 hours in emergency last night, and despite it being rather crazy in there, the doctors and nurses were all wonderfully pleasant and helpful.

I enjoyed your years in review! Wishing you all a happy new year!

May this be the best year ever.

I LOVE your color coded wrap up Connie!!

This is going to get fairly long some day. It's a fun way to look at how things change over a longer period of time.

This is an interesting wrap up over the years. Happy New Year!!!

Your "Year in Review" reminded me of those Five Year Diaries. My aunt used to keep one when she was a kid. I recently found it in her "treasures." It has a page for each day's entry--with each page subdivided for five years' worth of entries. At the end, it makes for interesting reading!

Happy New Year, Connie! We are moving forward aren't we!

continue to love this tradition. Wish I'd stolen it when you first started it.