My cousin Lyle died last week.  Lyle was the third son of my Uncle Andrew and Aunt Joan.  They would have three more children later…for a total of six.  My Aunt Joan died in 1987 and my Uncle Andrew in 1997. 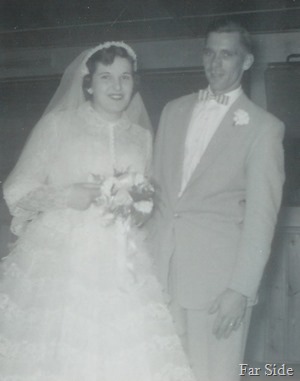 Aunt Joan and Uncle Andrew
Before my Uncle Andrew got married he lived with us, and he worked construction with my Dad.  Anyways…then he got married. ( I was heartbroken that he didn’t pick a gorgeous blonde to marry….but no one would have been perfect for him in my eyes.)

When Lyle was little they lived at the edge of Ponsford in a house way in the back.  ( Mary Ann my Aunt Joan’s sister lived on that property most recently but now she is gone too.)  Anyways…Lyle suffered some brain damage…from a plastic bib or a dry cleaners bag…depending on what version of the story you recall, I have heard both.   Shortly after that incident they moved to the farm kitty corner from us…on Far Guy’s Maternal Grandparent’s old farm.

Lyle was just a little younger than my other baby brother Jody.  Lyle’s speech was damaged by the lack of oxygen, he was hard to understand. It was frustrating for him.  He was in the Special Education class in School…I think he was mainstreamed a few times…and he graduated from High School.

Lyle was a farmer and a fisherman, he often stopped by with his Dad for coffee after a day of fishing in the winter. My Uncle took good care of him, then my Uncle died…Lyle lived on the farm with his brother Mark ( they called it a bachelor pad), when Mark died Lyle went to live with another brother.  Eventually Lyle entered the nursing home…that is where he was when he got pneumonia and was taken to the Emergency Room and died in Intensive Care.

I remember how he struggled when he was little to keep up with the other kids his age,  I remember when he was older and the Doctors told him he had to walk…you would see him walking back and forth on the dirt road east of the farm.   He loved the farm but he was wary of all animals.  He didn’t like my dogs at all. 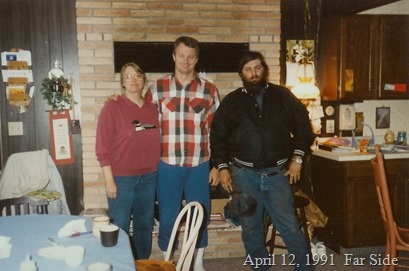 Me, my baby brother and cousin Lyle
April 12, 1991.
The photo was taken at my parents resort on the north end of the lake, my baby brother flew in for my Uncle Arnold’s Funeral.  We were gathered for coffee later that day or the next, Uncle Andrew was there with Lyle when someone said “take a photo of the cousins.”

I am sad, I think that is normal when a relative younger than you dies.  I can only imagine how happy my Uncle Andrew, Aunt Joan, Mark and Rosie were to see him again.  Half their children are left on earth and half of them are in heaven.