Yes the rain turned to ice and now the walk is slippery…but we had some sunshine. 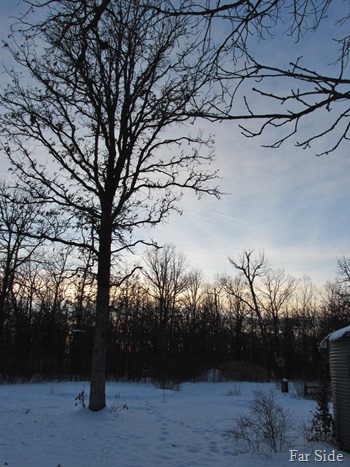 We almost had some color near sunset too.

I scraped on the ice some…where the snow fell off the roof and scared Chance…that snow is like cement….if I had a pick axe I might be able to budge it.  I hope for a melt…and that rain can stay away it is nothing but a headache.

Nothing is new…no big projects have been completed lately.  Same old same old…laundry, dusting, wonder what to cook and do up the dishes. We might be in a bit of a rut.

Far Guy has his Neurologist’s permission to decrease his Tegretol…he is down to one tablet a day now with hopes to be Tegretol free in a month.   The Aralast that he is infused with every week for his Alpha 1 Antitrypsin Deficiency has made a difference in his Trigeminal Neuralgia pain OR his Trigeminal Neuralgia is in remission after eight years.  We wish we knew which one was responsible.  From my perspective, I think Aralast could be a cure for Trigeminal Neuralgia pain…but I am not a medical researcher or even a Doctor… I am just  an observer.  Recently I read about a study being done with Tegretol as a medication to fight off the liver damage in Alpha 1 Patients.  I have a cousin who is in Medical Research, he is working on trying to find a researcher or two that might be interested in researching a connection with these two rare disorders.