My cousins funeral was on Saturday morning.
One of those long Catholic services.   There were plenty of places to sit so we sat in the back of the church…not much perfume there although the candles burning and incense was a little hard to take.

The Priest had quite a cough and kept stopping to cough and blow his nose…I was thrilled that we were so far from the front of the church.

Immediately after the service we headed to the Cemetery. 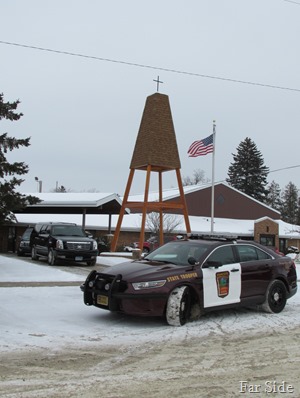 We had an escort. 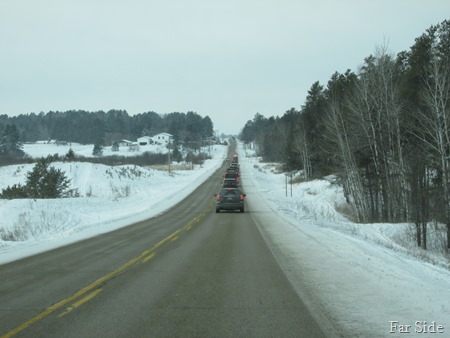 It was a dull gray day… the Cemetery is way north of town just outside of a little bump in the road village. 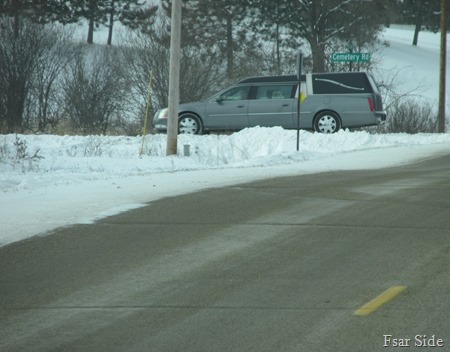 You know you are there when you see the street sign that says Cemetery Road. 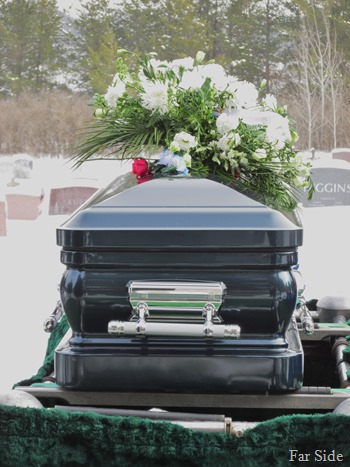 The lopsided funeral spray bugged me, I guess I should have walked right up and straightened it out….but it reminded me that Lyle was a bit different all his life…and wonky flowers on his casket wouldn’t have bothered him.

The Deacon said a bunch of prayers while the wind roared through the tall pines behind us and the snow on the heavily laden trees went airborne….it was a tad chilly with fine snow landing on us.  Lyle’s grave site is just a little west and south of his sister’s grave and west and north of his parent’s graves.  I will visit in the spring to make sure there are some kind of flowers.

We headed to the Osage Community Center where a funeral lunch was waiting.  Sloppy Joes, ham sandwiches, potato chips, pickles and bars of all kinds…and coffee….Lyle’s favorite foods.  There was much visiting with cousins. Lyle was never married, but he had three nieces and a nephew that were very special to him.

I remember when Lyle was born a bright eyed little guy! I remember him after he was brain damaged some of that light went out of his eyes.  I can only imagine how brightly those eyes must have lit up when he saw heaven all spread out before him…and his father, mother, sister and brother waiting for him there…I can only imagine.