The old photos that I scanned were returned this week to cousin Terry.  Frances was his mother. 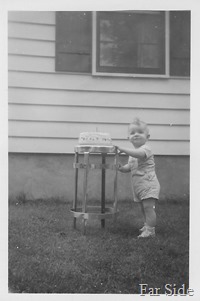 This is cousin Terry when he was one year old.   He was an only child and I heard he was the apple of his mother’s eye (very spoiled). 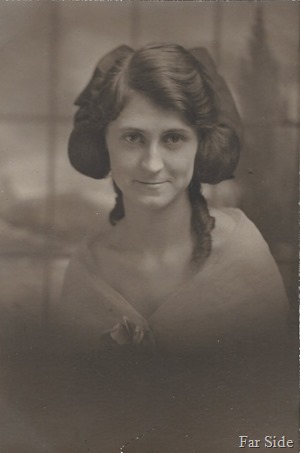 This is Great Aunt Frances in High School. I am pretty sure she has a huge bow in her hair. 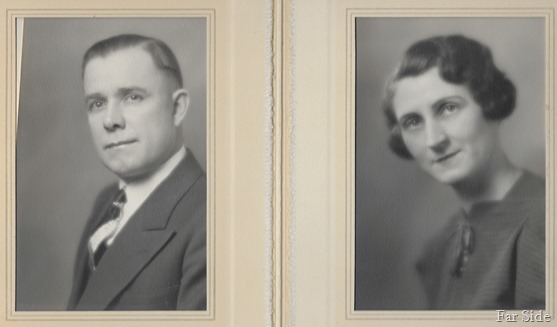 They owned a shoe store up in Grand Rapids Minnesota.  You could get the “family” price if you came up to the store on a Sunday and probably Sunday dinner too.  I recall Far Guy’s mother wanting a perfect pair of shoes and insisting that she go shopping there.  It was only 85 miles.

Chicken.  When I talked to Cousin Terry on the phone he said, “When we visted on a Sunday, the first stop was Aunt Emmas for chicken dinner and then it was on to Aunt Tracies where guess what was on the stove?  Chicken.”

Along with the photos that were returned, I sent a few copies of photos that he may not have and a copy of the part of the family tree that he and Far Guy share.  I was only able to push that generation back to 1814 in Germany and Alsace-Lorraine which was German held but some French lived there. There are not enough hours in the day to do the proper research…maybe someday.

The photo of Terry is cute! there appears to be a birthday cake with 1 candle in it on the stool.

I love your old photos. Aunt Frances didn't change in looks all that much, I would have recognized her from her high school picture. :-)

I was thinking that they took the picture of Terry outside so they could save on flash bulbs. I remember my dad doing that when we were kids--taking us outside to get pictures so he didn't have to use a flash bulb--LOL! But maybe he's outside because they planning on letting him go crazy on the cake and the mess wouldn't matter so much outside? :) BTW, I swear Frances has the exact same expression on both photos! Stay warm!

So nice that you are contacting others and sharing your research. Lovely.

What a cutie! I am sure all your relatives appreciate all your hard work and the hours you put in and if they don't, they should! LOL! I was an only child but because they were afraid I would get spoiled (ha! Not by those 2!) they made me into their little slave to ensure that didn't happen! I cleaned and took garbage out and mowed and even did mending. They wanted me to cook but I drew the line there! LOL!

I think they were brave leaving Terry alone with the stool and the cake!

Lovely old photos . It is interesting to find the history and hear the stories for family that you will may never see or meet ! Thanks for sharing , Have a good day !

I just love doing the family research as far back as I can.
It is getting easier so much help out there now. Not like when I started
10 years ago.

Your scanner works beautifully (I've just been cursing at mine for the past two hours.) Always fun to recall and relay these stories. I was in Grand Rapids, Minnesota just a couple years ago. Have some friends who live nearby.

Yikes, I hope the cake on that little stool didn't come tumbling down after the photo! They were brave to leave hm there alone. Love that giant bow!

Old family photos are such fun. I love highschool Frances' hair do.'

1814? Not too shabby! And Alsace Lorraine? Well, if you and I don't turn out to be cousins, maybe you will find out Far Guy and my guy are cousins...he has roots in the same place :)

That's a Mona Lisa smile for sure. What an interesting shot.