Wistful Wednesday on Thursday: A Car

Thought I would update on the car situation in 1924. 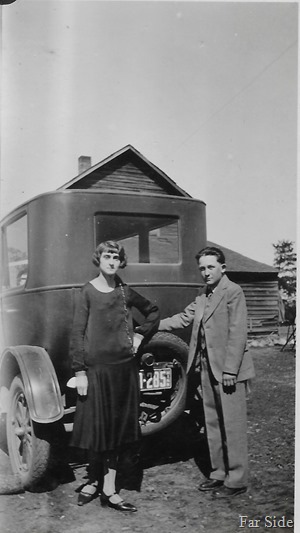 I am doubtful that this is the car…but it might be.  In the photo is Aunt Skinnie(Frances) and Far Guys’s Dad Marvin.  The photo is taken at the farm.  Marvin was born in 1914 so in 1924 he would be ten years old…I am thinking that he looks about 12 here.

Not a garage…but a shed.

I also heard a story. Grandpa wouldn’t let Marvin or Ronald drive his car.  BUT Aunt Skinnie (Aunt Frances) would let them drive her car into Osage, it had a rumble seat.  The boys would pile in and take off.  It was probably quite an adventure for them and gave Aunt Frances and Grandma quiet time to visit.

Wish you knew which car it was for sure...but at least you have some photos of the time, which is more than some people can say! He certainly was a busy man. Interesting it was a "car shed."

My brother had a Model A with a rumble seat. I rode in it one time - great fun!

No wonder these people were in great shape and not over weight with all the physical labor they performed.

Those were the days of fun cars and good farm work . Thanks for sharing , have a good day !

Grandpa James sure was a busy man. I'm amazed he had the time to keep a diary, however terse the comments.

It is a nice visit back in time. My dad was the same age as Marvin, just a couple of years younger. It makes me think about my great grandfather as he farmed everywhere he lived. Lost one of his farms during the depression. It is a neat photo and someone will recognize that vehicle.

He looks older than 12 even but then rarely do you see young boys in suits anymore so I', sure it makes him look older. I 'm surprised he's planting potatoes in June as wasn't it always Good Friday they went in? Is it that much colder up there? It seemed late for planting.