I am still working on those Farm Diaries…I find some things quite remarkable.  You could trade colts for a car and the people with cars for sale made house calls.  Perhaps you will enjoy Far Guy’s Grandpa James X.’s shorthand. I am getting much better at reading his hand writing!

No mention of what kind of car just a car.

Now the Les Enfield that I knew was always a car salesman.

Friday July 6 1923 Thresa and Frances took cream in car I plowed corn to Ponsford celebration in PM Played Dance at Ponsford in eve ( First mention of driving a car, I wonder who drove?  Aunt Frances or Grandma Tracie? Grandma is said to not drive at all until after Grandpa died. Were they just testing out a car?  There is no more mention of taking cream in the car.)

Sunday July 29 1923 Dads here to see about car deal got binder in eve Beck came home with me ( Dads was Tracie’s parents, when Grandpa left Logan Iowa he never saw his father again.) 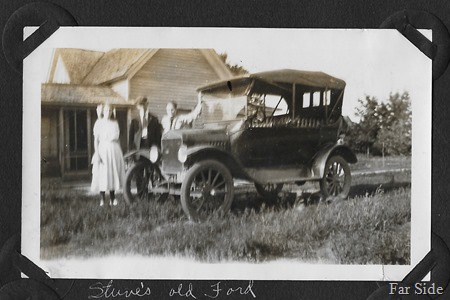 Stuve’s old Ford
This photo was in the photo album that belonged to Aunt Frances. Not sure who the people are …that could be Aunt Frances with the big bow in her hair…we may never know.

We do know that this was most likely the car that her parent’s /Dads/the Stuves purchased.

Did new mean brand new or new to them?

I take it that only the elders (Great Grandma and Great Grandpa Stuve) bought a car.  But you never can tell what hints the next monthly diary will bring.

My dad kept a small diary like that his whole life, his shorthand, about 20 words a day. The weather was always included! I haven't gotten to those yet. I'm still working on his letters home fromWWII. That's s great photo of the proud family with their new car.

That car had to have been a cherished possession. I am enjoying these old diary entries, thinking of how different life was back then. :-)

Precious photographs! But how sad that people hardly ever wrote on the back of the photo who the people were. I love family history, and have many regrets about not keeping more from the past. Good luck with this important project!

Love the old photos you share with us.Blessings Francine.

You are really blessed to have these wonderful journals! This is exactly why I write in a blog. Maybe someday my writings will be in the hands of another generation!

What wonderful memories and to have such a journal is awesome . Love the old photo to . Thanks for sharing , have a good day !

I'd guess the car was a new one in 1924, as no one would have had a used one to sell. Back in those days, if you had something you kept it forever.

He would have excelled at Twitter.
Never knew people brought the cars to the buyers! I wonder how they got home if they sold it?
All fascinating--and you found a picture of the car! :)

Old journals/diaries provide a wealth of information. Thanks for sharing the entries about the car.

It is interesting how people always liked to have their car in a picture. I think some even do that these days when they get a new, longed-for spiffy car! We seem to be a car-proud people!

You might not know exact details but you get a general idea of what went on.

Grandpa James must have been a man of few words but at least he kept a journal of his days which is so great. Makes me wish my Grandpa had done likewise. Or Grandma... I guess her diary would have read the same day after day... cleaned the house, baked bread, milked the cow, made butter, etc.etc.

Those diaries are quite a puzzle to solve. Good for you for working to clarify them.

Interesting to glean those tidbits of life back then...and the point of view. What a great find with that old photo of the car. Maybe some hints in the journal will help you figure out who the people in that picture were.

How fascinating! And with pictures too! I love those "olden days".