Wistful Wednesday : Filling in the blanks

Every winter I TRY to work on genealogy a bit and those farm diaries from my husbands paternal family.  I also try to look up a relative and make contact with them.  Never can tell what they know or what they have or what they are willing to share.

Last year I wrote to a relative and was ignored.  I have copies of photos of his father.  I thought he might be interested.  No dice.

This year I chose hesitantly and wrote a letter… I got a phone call.  It was Terry he is the only child of Aunt Frances and Uncle Chet, he said “I have a whole box of stuff that was my Mothers, I will mail it to you. I would like it back, someday my kids will probably throw it away.” The box arrived last week and there are some very interesting photos.  I am in the process of scanning them.
So we begin to fill in the blanks of an old photograph album that Aunt Frances kept.  It is dated 1922 To Skinnie from Vern.  Skinnie was Aunt Frances nickname.

Most old photo albums begin with their persons beginnings. Even though Aunt Frances was the baby of the family being born in 1903, she started with her parents. When I was sweet 16, and you were 21. I believe that the photo is Louisa 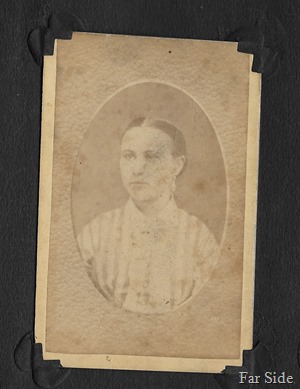 Louisa Wilhelmina Basch born November 8 1860.
This Tintype was amongst the photos that Terry sent.  I was excited to see it!  I knew immediately who it was. 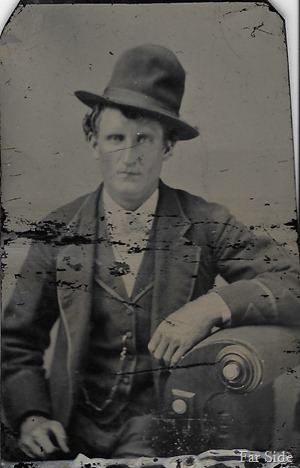 Louis Carl Stuve born Feb 21 1854    Tintypes unless they are in an album are hardly ever marked.
This is a tintype of their wedding photo  February 5 1880. Cousin Ken whose Mother was Laura shared this tintype with me a number of years ago. 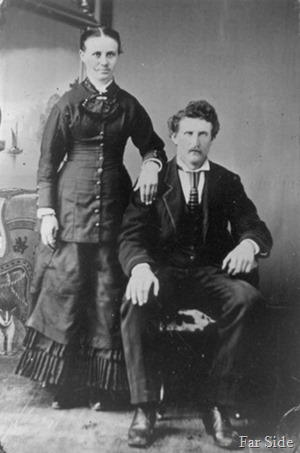 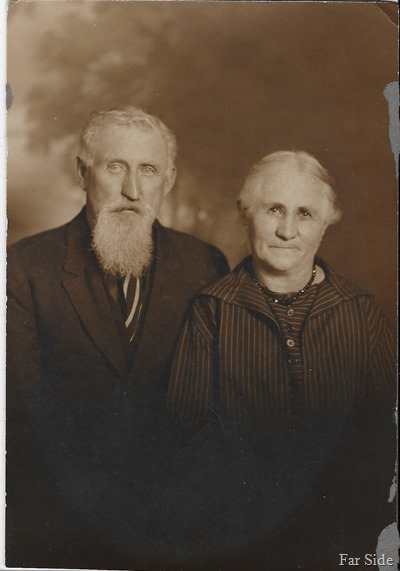 Louis and Louisa an older photo.  I think I can safely say that the earlier single photos are them.

At Find A Grave I have been able to locate 13 of their 14 children and link them to their parents.  I am still working on photos for that branch of the family.

I am glad I reached out to this cousin we had a nice visit on the phone.

I just love looking at old photos. I don't even have to know the people! Louisa has a beautiful, sweet face.

How wondeful that you got a response when you contacted a family member this time! I can relate to the no replies. I contacted two male cousins last year and heard nothing back. Oh well. Isn't it interesting that in the photo of the younger couple that the gentleman was sitting? I ran across several from my family that looked like that, too. The photo of the elder Louis and Louisa is sweet. Winter is a great time to work on genealogy.

I love that last photo. Both of them look like what we used to call "the salt of the earth." :-)

How wonderful, that you got a phone call. The photos are just great. It is amazing how it has gone from those photos, to the photos that are taken today.

You are really spending a good deal of time with this research. So happy you enjoy it.

That's awesome you were able to get all that info and photos . I do like the old photos they really do tell the history of back then , the last photo is my favorite . I love seeing old photos and finding out history of families it is all very interesting , Thanks for sharing , have a good day !

As to the men sitting in the old photos, and the women standing - I think that maybe be because this way the women's dresses could be shown better! Just my thought. I love seeing these old photos!

Yes and often the men were very tall and made for an awkward photo:)

This is a wonderful thing you do.

My gosh those photos are in fabulous shape too! So fun to look through them isn't it!

I have a few boxes of old photos. I have no idea who they are. I don't even know whose family they came from. It is so sad people never bothered to mark them. I am happy you are finding good pictures of your families.

You are doing an incredible amount of work on this project and it is well worth while doing..

It is exciting when things fall together. Have the box gives you time to figure out a lot of things. I liked that he wanted it back and probably his kids would throw it away. I had a distant cousin pass away and while reading the obituary I figured out a lot of things in that branch. I went to school with her and she married into a large family. I still have one death of her nephew that I don't know who he belonged to. I went to school with all of them but wasn't around when they married and moved away from the home area.

The photos are real treasures. So happy that this contact worked out well for you. Amazing the info you have been able to attain.

Wow. Big new project. Just think of the advances in technology since those photos were taken. Can you imagine explaining what you are doing - scanning old photos- to those folks who are pictured there?

Interesting photos. I'm glad you're recording the family history and sharing it on your blog.

I'm another one who loves looking at old photos. I also have some that I have no idea who they are and no one is left to tell me.

You are amazing! Those are some great old photos.

This was a great connection - you just made more work for yourself (but very interesting work) :)

Oh, what a treasure! I am so glad that phone call turned out so well for you. Hope it helps figure out more connections, too!

How wonderful is that! Those 2 didn't change much...they looked the same even after many years. Even I could have recognized them! Great photos but 14 children? Oh boy, what they went through back then.