I have an old postcard of Ponsford Minnesota. 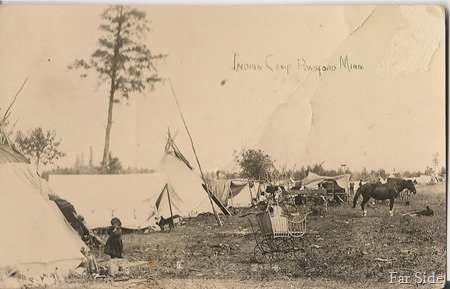 I wrote about the bad spelling of the Ponsford sign yesterday.  Ponsford is seven miles from where we live.   Ponsford used to be one of “the” places on the map with a bank, two boarding houses, grocery stores, Post Office, gas stations and even a movie theater. Then a new highway was built and Ponsford became one of those forgotten towns.

Ponsford and Pine Point Indian Reservation are one mile apart. Once a year on the 4th of July there would be a big gathering and a party in Ponsford…everyone would come.  Far Guy’s Mother remembered going there as a child.  There would be a Pow Wow and a parade.  The Ojibwe; Ottertail Pillager Band settled at Pine Point.  Some Indians were traditional hunters, gatherers…and some adopted white mans practices and built homes and sent their children to school…and some mixed part of the two cultures. The whites lived at Ponsford and the Indians at Pine Point.

The Mission:  When I was growing up we always called it “The Mission”…not Pine Point and not the RES.  Long ago they had a Mission School and a Episcopal Mission Church, and a Catholic Mission Church on the reservation.

One of the first teachers at the mission school in 1890 was Orville D. Ponsford.  He taught for two years and then went back to farming.  The school had troubles and was taken over by the Government…then it was called the Government School and it boarded the students there during the school year.

In 1890-1891 the residents wanted their own Post Office so names were sent in…Pine Point was one possibility but it was rejected because another place was using that name. The petitioners sent in their own names and as it happened Mr. Nunn underlined Ponsford’s name so the Post Office became Ponsford. The Nunns remained in the area for years and still have descendants in the area…and Mr. Ponsford well he visited Ponsford twice before he died.