Nope not that kind of cruise.  A cruise around town in the new old car (Tilly).   Far Guy joined the local Car Club. 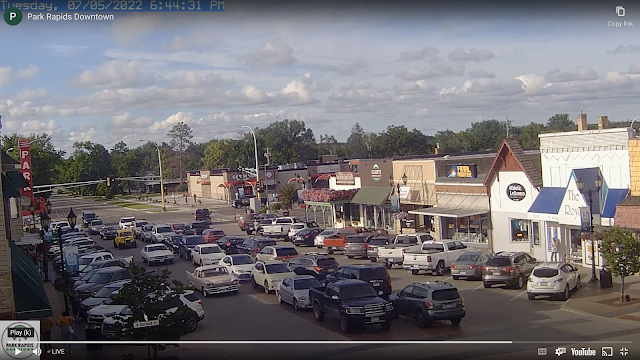 After the cruise we met at A & W, it was a nice evening and there are a bunch of picnic tables there.

We met another couple, he acquired his car a Mustang a few months ago.  He was also a new member.  I visited with his wife.

Town people are sometimes stand offish...stuck up...most are not the kind that will walk up and introduce themselves....so you have to be outgoing enough to break the ice.  (They will ask everyone else around who are those people...but not walk up and ask for themselves.)

Far Guy wanted a photo of Tilly and the Park Theater on Main.   We hope to get a better photo sometime ...this one will have to do for now....as you can see there were many tourists in town. 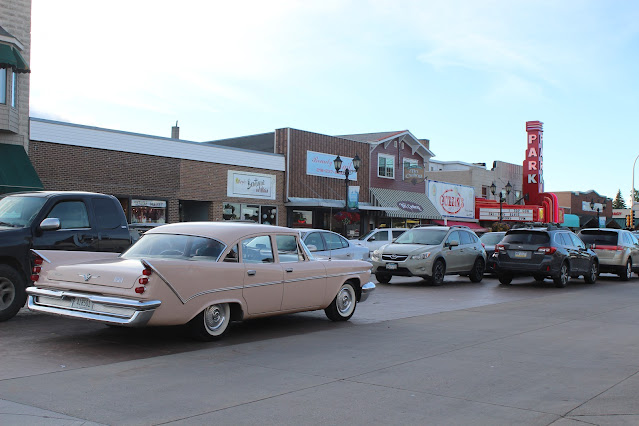 I would like to get just the car and the theater!  We may have to go into town later at night just when the theater is closing.

It was a fun evening out, it probably counts as a date night even though I bought supper because I was in town early getting an oil change on the Buick.  Far Guy met me in town and after all the doings we dropped off his Desoto named Tilly to get new brakes.

Yesterday we cleaned out the garage that Tilly resides in because she rarely leaves her garage.

Tilly is a real beauty! Glad Far Guy joined the Car Club; should be a lot of fun for you both. Fun nights out are getting to be a rare thing for me.

Tilly is indeed a beautiful car!

This reminds me of a fun drive we had in the 80's when friends acquired an older car that had little vases in the back seat sides for holding fresh flowers. We laughed a lot as we drove around the neighborhood for an hour. Good times!

Tilly is beautiful! Crusing main street sure brings back memories of when I was a teenager. Of course I didn't have a car as beautiful as Tilly to show off. My friend did have a 64 Mustang, but back then it was just an old car, not a show piece. How I would love to have that Mustang now!
Blessings,
Betsy

Good to see Tilly out on the town!

Tilly is a lovely car! I'm sure the cruise was fun.

I've learned, over my years of travelling solo, that I often need to make the first move towards talking to other people. It's easier when one has a topic of conversation in common. Like your beautiful car!

The car club sounds like a lot of fun. And my kind of cruise.

Tilly sure is beautiful! I bet if you take her downtown in the evening, and have the camera on a tripod you could get a really nice image of the car and the theater!

I wish I looked as good as Tilly at her age! LOL! I love the pink too. What a fun evening. What I wouldn't give for an A and W root beer float!

Tilly is looking fabulous for a lady of her age!

Everybody needs an interest to keep them going especially seniors. I like to hear about Tilley.

I thought of you two on the 4th as we watched classic {old} cars parade that morning. I think you will have fun at Car Club. What's the club's name?

Really out on the town with Tilly! Sounds like a good time. :)

So much fun. We go to Sonic on Friday's to meet car 'people' It makes the week go by faster, somehow.

Ha! Sounds like lots of fun for you guys. You even got to meet a couple of new people in your car club! My husband is always the talkative one of the two of us! We used to show our old cars at car shows too. Enjoy! I like the pic of the car and the old cinema!

What a lovely car, especially the color! It’s always a special pleasure to meet new friends.❤️

My husband really enjoys the 'adventures' of Tilly. He loves old cars. I suppose if he had been inclined at some time in his life to collect ones to fix, we'd have fields of them!

I think a photo at dusk with just Tilly in front of the theater would be cool. Even a night photo would be incredible!

Tourists. When I wander around town and go to the second hand stores, they are there! But it makes our town happy and more prosperous than it used to be. Once upon a time almost all the stores on main street were empty. Now they are full and it is good to see.

Oh how fun, Connie!! I sure would have loved to stroll around & look at all of those beautiful old cars!

My experience is opposite. I find "town people" to be really friendly & the "country people" around here to be very snobbish & stand-off-ish. I guess different areas of the world are different.

What fun! A drive in is the proper place to meet up after a cruise on Main Street. My sister and brother-in-law have a 52 Chevy he has restored and enjoy cruising the streets of some of the old towns in northern Wisconsin.

The movie theater that I attended as a kid burned down in 1967. The town is on its last leg and most all of the main street is now torn down. Murray is just thinning out to houses spotted all over town with all the spaces of torn down houses.